It’s no secret that I love to pore through the street photography tag in the WordPress.com Reader and share images that catch my attention. Join me on another trip around the world as seen through the eyes (and lenses!) of these seven skilled photographers.

This arresting image of a bird in a car — juxtaposed against the unknowing elderly man passing by — mesmerizes me. Taken by Beirut photographer Ghaleb Cabbabé, there’s an element of the macabre about this photograph that I find intriguing. The odd bird and the filthy windscreen create a certain palpable sinister portent. Check out more of Ghaleb’s work at ALICE BACK FROM WONDERLAND. 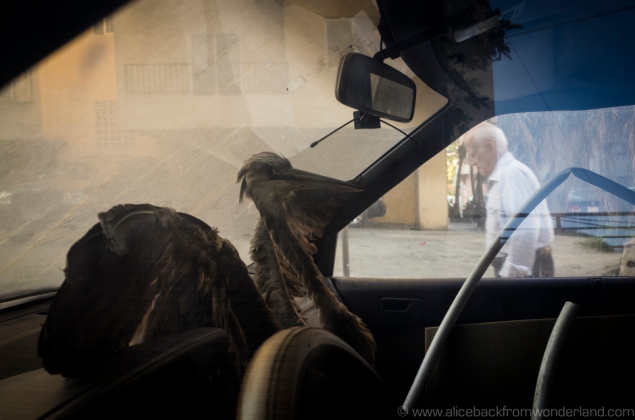 Continuing along with ethereal — perhaps even unearthly — imagery, check out this photograph by Akshay Shaha taken at the Multiplex Theatre in Hyderabad, India. The blurred people walking near the Poltergeist poster look as if they’re ghostly spirits who’ve come to take in a movie, wouldn’t you agree?

Below, thasveeru‘s image of the two older gents in conversation in Malé City, Maldives, struck me. The man on the left, caught in mid-gesture, and his companion, deep in thought, leave me wondering what they were talking about.

And now, over to Paris, and Pat Callahan‘s charming photo of an elderly man clearly engrossed in his reading material. His bent posture and calm engagement against the deep red, yellow, and blue of the wall behind him is quite soothing. 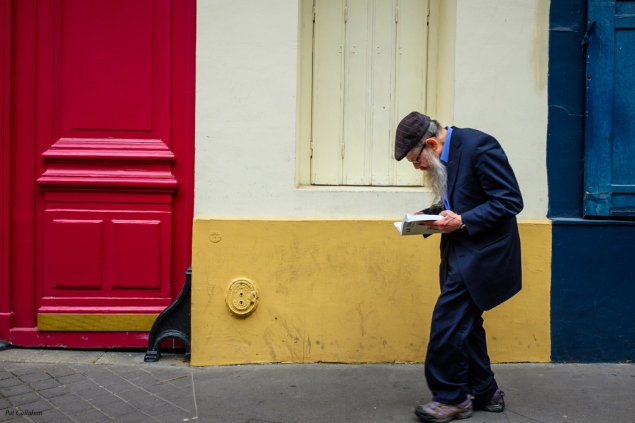 From Paris we go to Brighton, UK, below for a bold image of a different kind by Peter, the photographer behind Eyeteeth. The jagged angles, the stark repeating pattern, and the intense contrast captured my attention.

From Brighton, we move to Seoul, South Korea, and this image of the bread vendor at TYR Photo. The man’s brightly lit face, his quizzical gaze, blue-striped shirt, and the colorful red and yellow sign are quite captivating.

Below, at our last stop on the tour, we’re going to rest — just like this tired pup — in Shanghai, China. I can’t help but find that cute canine face and the dog’s relaxed posture irresistible! This photo is one among a vibrant, colorful gallery on Thatiana Terra‘s site, NEVER CLIP MY WINGS.

Where in the world have you travelled courtesy of the street photography tag in the WordPress.com Reader?